Server glitch wiped the last few articles, so here’s a repose of the Barcelona one. Also, comments should be working now, should you deign to leave one…

Somehow I managed to visit Barcelona a few years ago and not learn about the history of the city’s Eixample (x pronounced sh in Catalan), or extension/widening (ensanche in Castilian). So to spare you all that fate, I’ve assembled a short history of Barcelona’s Eixample, which has parallels in eixamples/ensanches/zabalgunes (Basque!) across Spain.

So here’s the history, as told by Eduardo Aibar and Wiebe E. Bijker! (.pdf)

It starts in 1714, when Philip V, the Bourbon King of Spain based in Madrid and supported by the Castilians, conquered the Catalan capital of Barcelona, creating modern, unified Spain. Catalan culture and language was suppressed for more than a century, but more relevantly for urbanists…

The technical shape of society was also checked. An enormous military engineering project was launched to put the city under continuous surveillance of the Bourbon troops. A huge pentagonal citadel, designed by the Flemish military engineer Prosper Verboom, was built near the harbor to dominate the city. The army thus could bombard any target within Barcelona with heavy mortars. A high wall, fortified with bastions and fronted by a moat, zigzagged from the western face of the citadel up the north side of the city, around its back, and down south again to the port, meeting the sea at the ancient shipyards. This way, Barcelona became an enormous fort in which the military installations covered almost as much space as the civilian buildings.

The result of Philip V’s project was to enclose Barcelona in a rigid straitjacket of stone that prevented any further civic expansion and industrial development. The walls soon became the main urban problem of Barcelona, and the whole military complex remained a hated symbol of Castilian rule for a long time. The walls were not only a physical obstacle for the city’s extension but also a legal one. Construction was prohibited in the so-called firing range-a series of overlapping semicircles with a radius of some 1.25 km and their centers at different points in the fortifications. This firing range created a no-man’s land outside the walls covering almost 61 percent of the territory within the city limits. In the nineteenth century, with the walls still there, it was impossible to propose any town-planning idea without making simultaneously an implicit political statement. One’s personal attitude toward the walls revealed much of one’s political position.

By the middle of the nineteenth century, living conditions in the city were dreadful. The population density, with 856 inhabitants per hectare, was the highest in Spain and one of the highest in Europe; the average population of Paris was, for instance, under 400 inhabitants per hectare. The average living space for workers was about 10 m2 per person. This extremely high density, a bad water supply, and a poor sewer system made for atrocious conditions of hygiene. Different epidemics broke out in 1834, 1854, 1864, and 1870 – each time killing about 3 percent of the population. Between 1837 and 1847, the average life expectancy of men was 38.3 years among the rich classes and 19.7 among the poor.

Nevertheless, all the different Spanish rulers since 1718 took great care of keeping the walls upright, until they were demolished in 1854-1868.

So here we are in the mid-1800?s, and Catalonia has gone from walled to the heart of Spain’s industrial revolution. The Ciutat Vella, or old walled city, grew in a relatively organic and unregulated fashion, but the advent of rail transit, the sudden expanse of new land, and, perhaps most importantly, the Enlightenment, meant that the expansion of Barcelona outside its old walls – the Eixample – would be much more orderly and controlled. (The old city did not have a grid forced onto it à la Haussmann’s renovation of Paris due to opposition by property owners, though it did have a few straight-ish streets carved through it, the most famous of which is La Rambla.)

Enter Ildefons Cerdà. He proposes a standard gridded street pattern, with the flourish of having the corners cut at 45 degree angles – “chamfered street corners,” they’re apparently called – to afford vehicles a wider turning radius (nowadays they’re mostly used as a place to park cars, as you can see in the first photo below). But he also lays out strict restrictions on bulk, calculated by a weird pseudo-scientific quadratic equation-like formula that he never bothered to explain.

There was some drama with the awarding of the prize for the plan, though, and Cerdà never actually earned any money off of his design, but it was the basis of the urban plan that was eventually enacted for the Eixample.

What’s interesting, though, are the changes that were made. Basically, it was made more dense (something that the authors of the paper, who analyze it in a Marxist framework, seem hostile to)…

Cerdà’s building bylaws were considered very demanding: buildings could not exceed more than 50 percent of the block’s surface (the other 50 percent should be set aside for gardens), they were allowed in only two of the four sides of the block, they should be less than 20 m high, and their maximum depth varied from 15 to 20 m.

After the Royal Decree a slow process of implementation began, in which a large number of small modifications were introduced, eventually resulting in big changes. Even the approved plan (1859) showed remarkable changes compared with the first version (1855). Evidently, Cerdà introduced them to diminish the resistance by his opponents. The average width of the streets was reduced from 35 to 20-30 m; the explicit concern with special housing facilities for workers, as a means of achieving a more egalitarian city, was completely abandoned; the depth of buildings was extended to 20 m in all cases; and the former regular distribution of parks (82.35 hectares) and public facilities was not made obligatory (Grau 1990).

Cerdà’s position as the governor’s expert in charge of the implementation of the extension plan was weakened by the threatening demands of the land owners of the Extension. The land beyond the walls – once cheap and useless-had become, thanks to the extension, an enormous potential source of income as the site for the new city. The owners wanted to control the extension development as much as possible to secure profits. Actually, to promote the building process – deliberately stopped by the land owners during 1861 as a sort of lockout – Cerdà had to give up and accept crucial modifications of his plan: blocks started to be closed (that is, with buildings placed along the four sides); narrow passageways splitting some blocks in two were allowed; and the depth of buildings grew to 24 m, thus reducing the inner garden space.

Regarding the “egalitarian city,” I can’t get access to the original Grau source so I’m not sure if he had other means of achieving mixed-income neighborhoods, but part of Cerdà’s plan was the grid itself: he thought that its uniformity would eliminate class-segregated neighborhoods. In reality, the wealthy clustered their modernisme mansions and apartment buildings by Gaudì and Domenech in certain neighborhoods, like always:

Another important transformation – against the spirit of Cerdà’s plan – took place during the first decades of implementation: a hierarchical [social] structure was superimposed on the regular geometrical grid. The zone around the Passeig de Gràcia was increasingly considered an aristocratic residential space. Land and housing prices were established as a function of their proximity to the Passeig de Gràcia. As a consequence of this slow process, during the 1890s the right (northeast) side of the Eixample had already achieved a higher level of quality than the left side (García 1990a, 1990b). To live in the right side of the Eixample remained for a long time a sign of distinction.

The authors say “was superimposed,” whereas I’d say “emerged,” but anyway, moving on…

But maybe the most important modifications were the ones introduced in the plan’s specifications for the blocks. In that sense, not only was the rejection of Cerdà’s bylaws crucial, but it was particularly remarkable that the land owners were powerful enough to act beyond the limits of the bylaws, with no serious opposition from the city council. In 1872, 90 percent of the buildings in the Eixample (about 1,000) were violating the building bylaws. Already in 1890, buildings occupied 70 percent of the block surface on the average-instead of the original 50 percent. The situation was worsened by successive building bylaws, and in 1958 the building volume of the block, that according to Cerdà’s bylaws should not exceed 67,200 cubic meters, reached 294,771.63 cubic meters.

(New York City has a similar trajectory before the 1916 unified zoning code, with many pre-1916 buildings being in violation of relatively unenforced limits on density.) The authors seem very dismissive of the increased density, although I see it as evidence of the inadequacy of Cerdà’s plan. Barcelona’s Eixample neighborhoods are beautiful, and I can’t imagine thinking they should have their density cut by more than three-quarters, but that was the plan.

These days, we’re much more deferential to urban planners, and property owners wield much less influence. Density is usually reduced from the original plan rather than dramatically increased, and there’s almost always affordable housing set-asides.

Today’s Eixample is inching back towards Cerdà’s original plan, but only inching. Apparently a law was passed in 1986 that encouraged the courtyards – many of which had been filled in to maximize floorspace and rents, as you can see in the photo below – to be cleared, although I’m not sure how much effect it’s had. 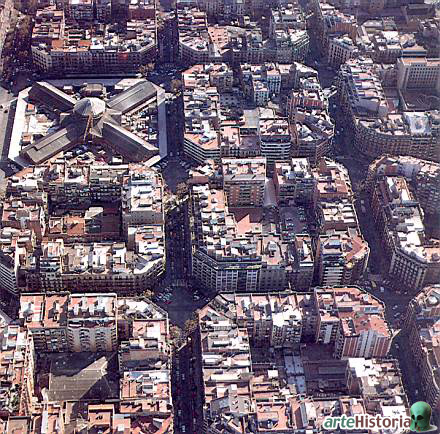 And here you can see the clear division between the Eixample and the Ciutat Vella: 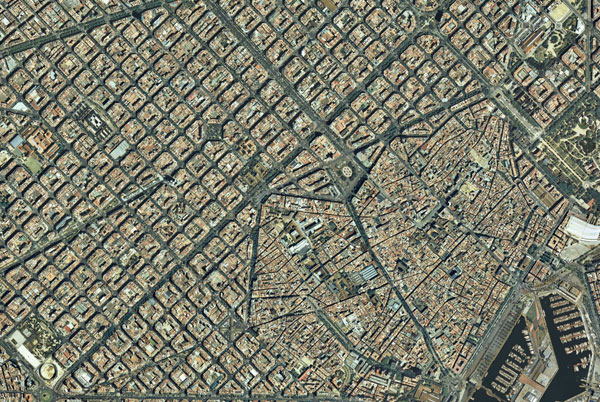